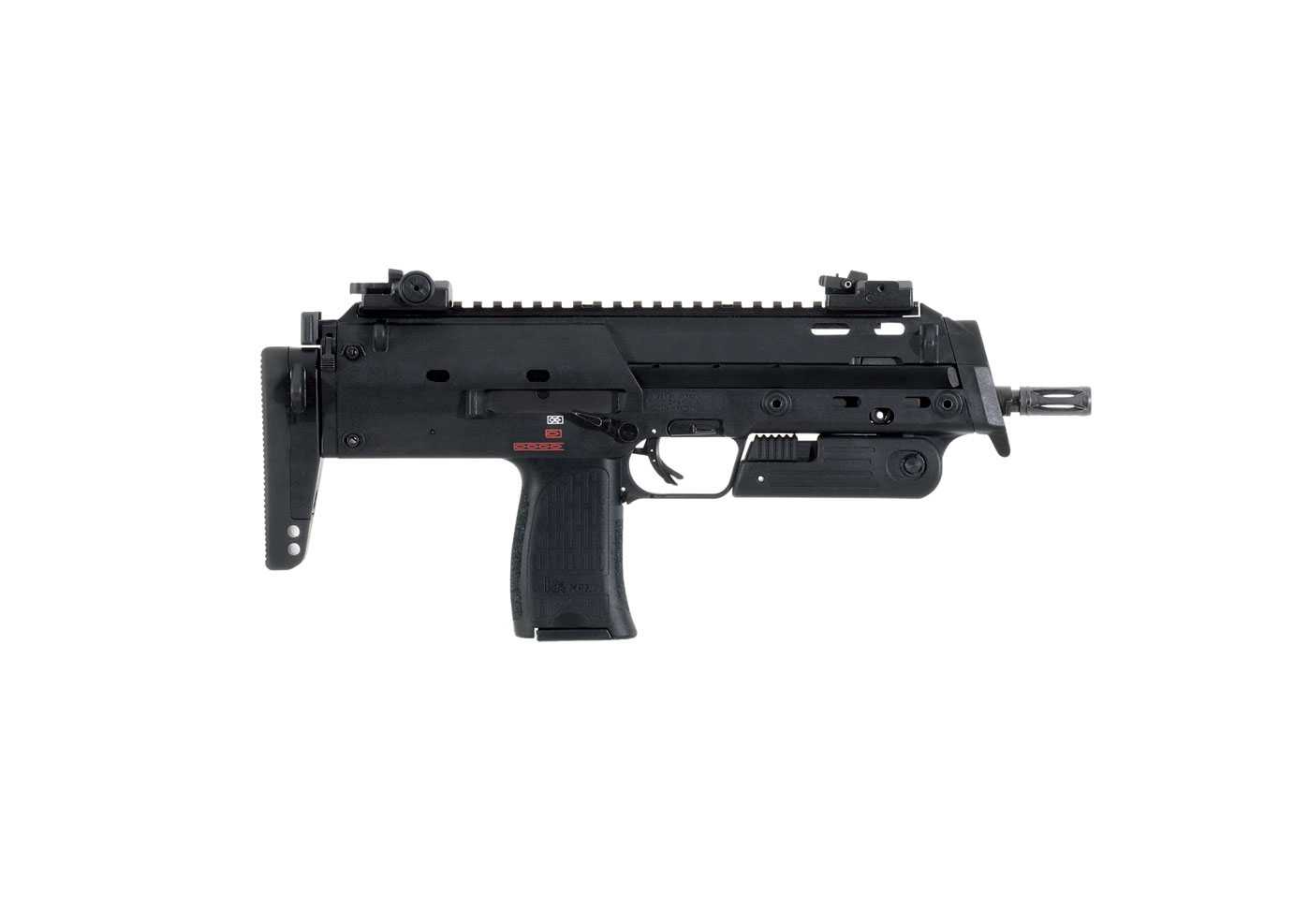 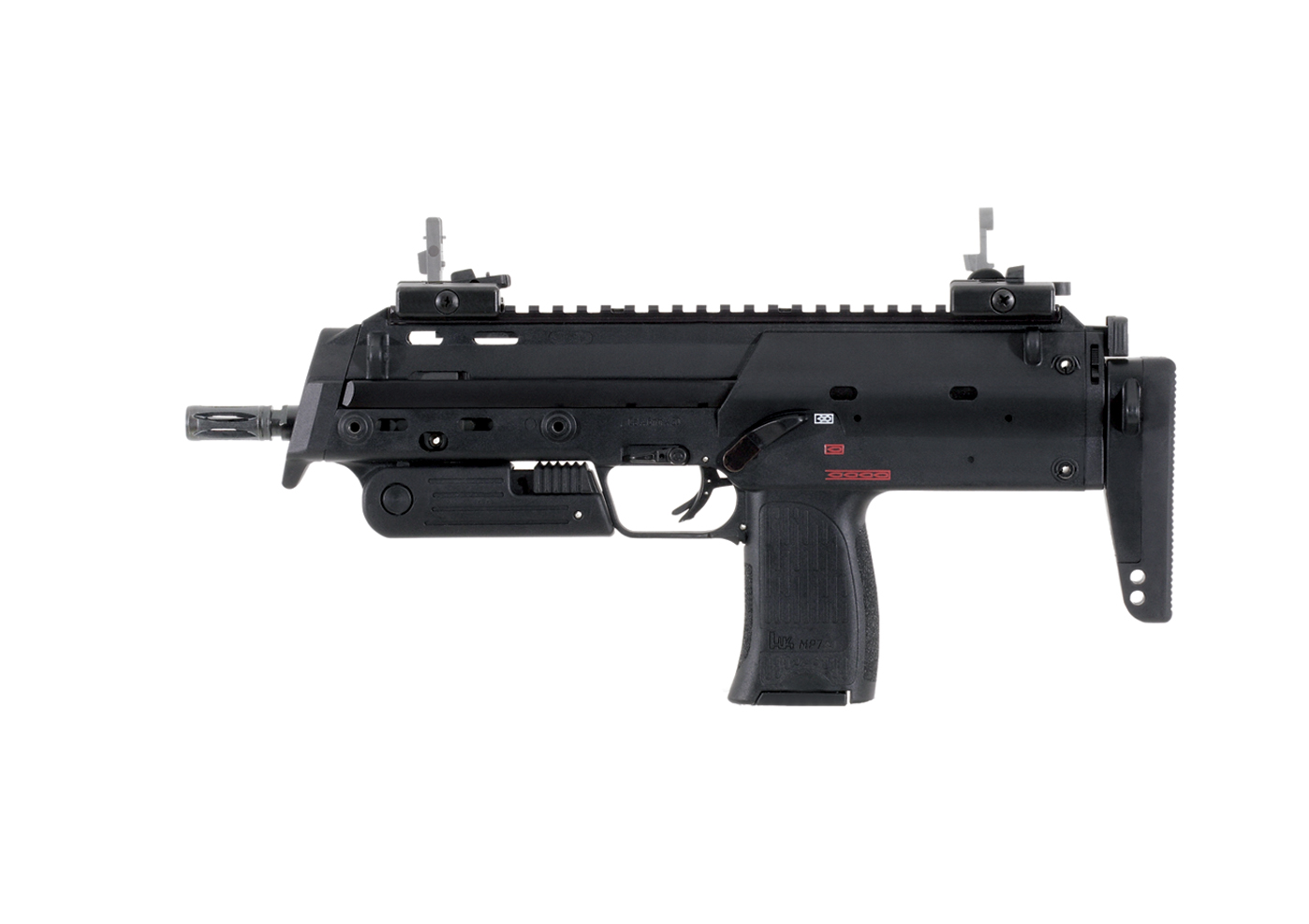 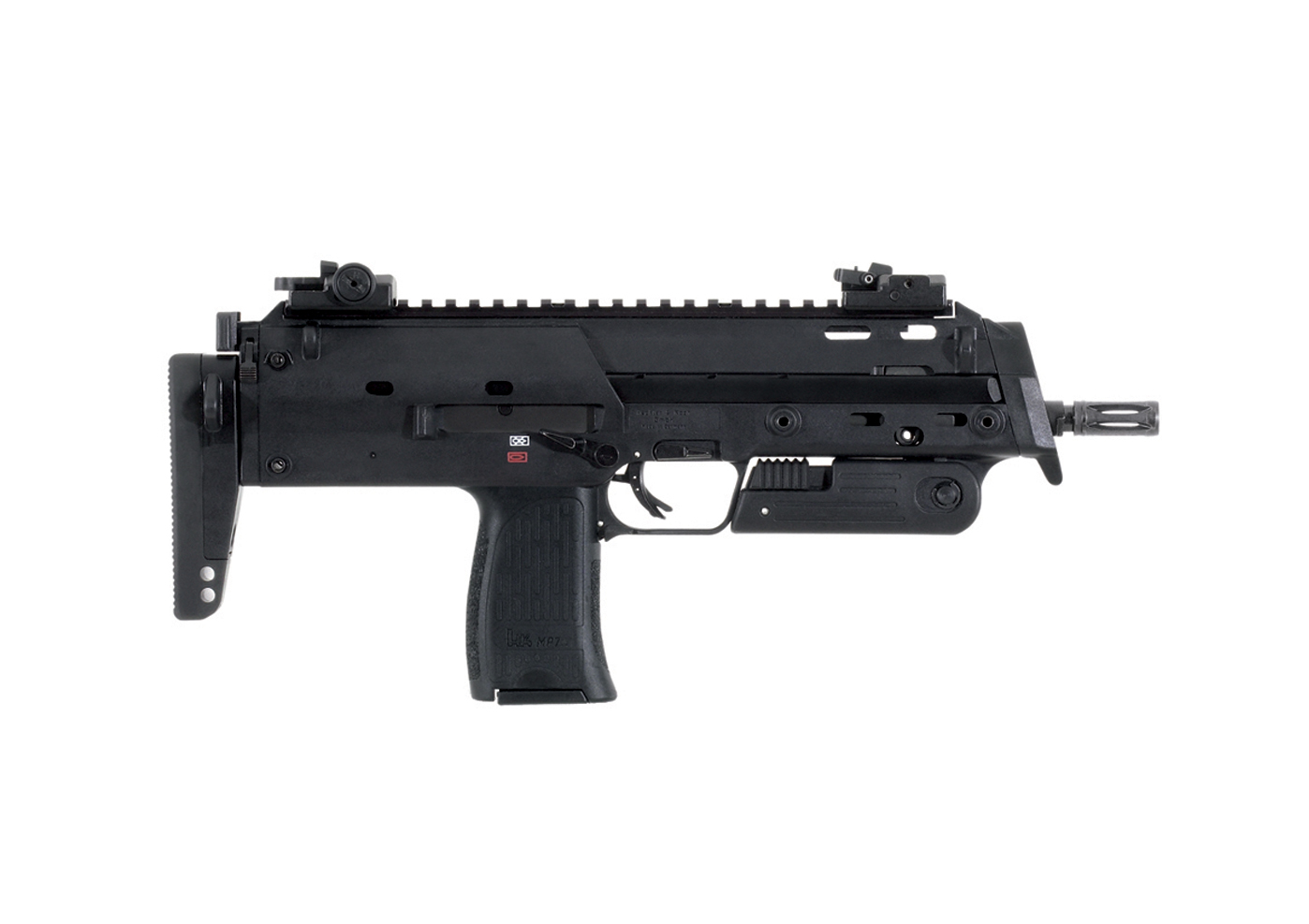 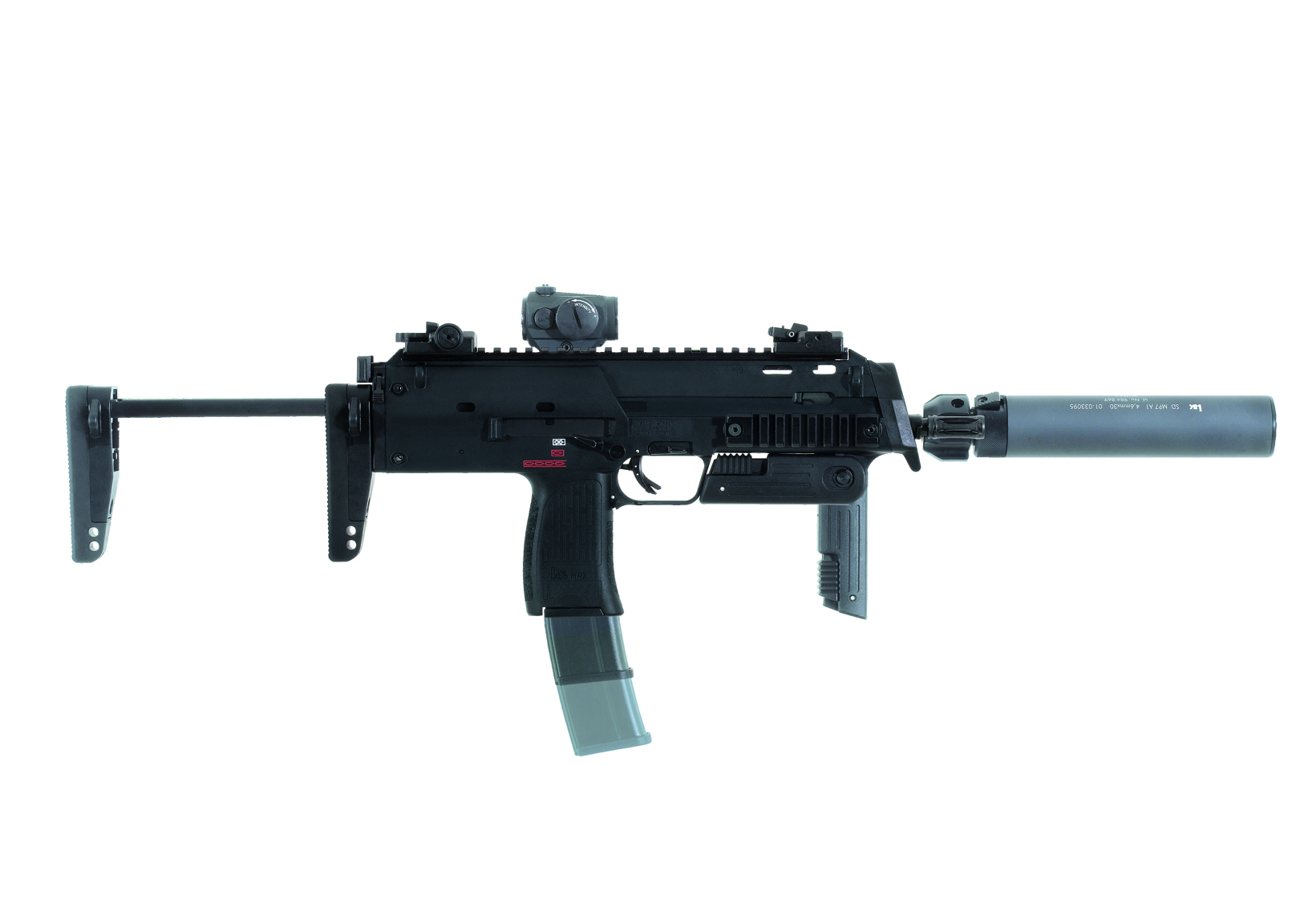 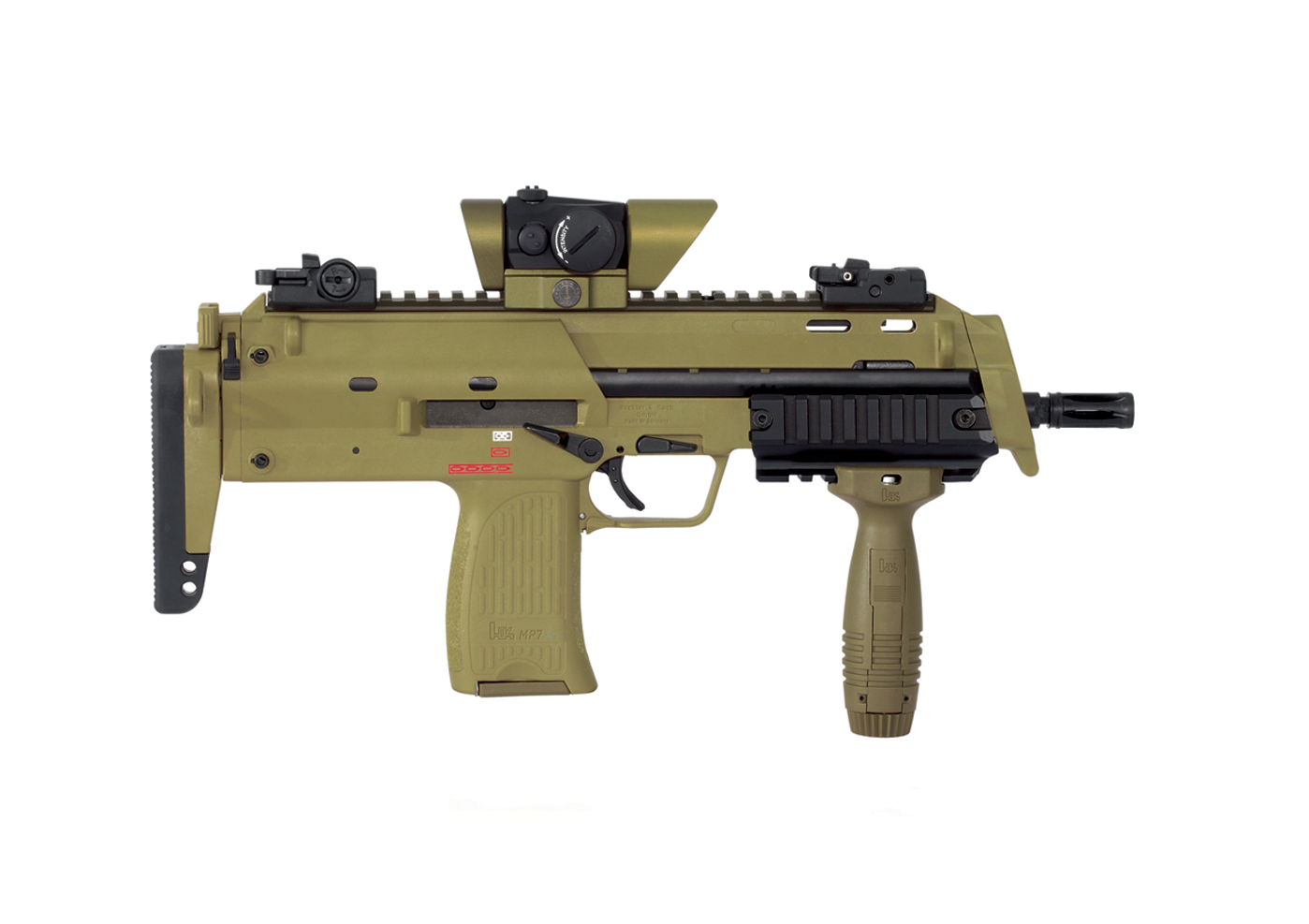 Smaller than a conventional submachine gun, the 4.6 mm MP7A1 is a compact and lightweight Personal Defense Weapon that can be carried like a handgun yet is capable of rifle-like effectiveness.

The HK-developed 4.6 mm x 30 ammunition provides the penetration approaching that of an assault rifle round and is able to defeat the types of body armor frequently found in the hands of terrorists and criminal gangs, in particular that of the former Soviet Bloc special forces, now the standard NATO test target (CRISAT).

In response to the NATO PDW requirement document D29, HK developed a Personal Defense Weapon system that will penetrate the CRISAT vest, comprised of 1.6 mm titanium plates and 20 layers of Kevlar, out to 200 meters and beyond.

Adopted and fielded by several of the world’s leading special operations units, the gas-operated MP7A1 fires from the closed bolt position, using a rotary locking bolt system similar to that of the HK G36 assault rifle to contain the powerful 4.6 mm cartridge.

The MP7 handles like a pistol yet allows targets to be engaged like a rifle. With its 7-inch barrel, the HK MP7A1 is capable of firing 10-shot semiautomatic groups at 45 meters of less than 2 inches.

Unlike competing designs, the handgun-like appearance and fully ambidextrous design of the MP7A1 ensures immediate acceptance by all users.

The MP7A1 is manufactured predominantly of carbon fiber reinforced polymer with embedded metal components where needed. The weapon can be field stripped in seconds without tools and requires little cleaning due to its unique gas system.

The lethal 4.6 mm x 30 cartridge produces minimal felt recoil (50% of a 9 mm NATO round) — assuring that multiple hits are easily obtainable in all modes of fire — incapacitating the target through penetration and permanent tissue destruction.

The MP7A1 is fitted with a removable full length MIL-STD-1913 (Picatinny) rail on the top of the receiver for mounting a variety of optional targeting devices. Optional forearm rails are also available.

Standard folding mechanical peep sights can be fitted to the top rail or optional reflex, holographic, and other advanced sights can be attached in seconds without tools.

Advanced optics like reflex (red dot sights) and holographic sights make aiming and target acquisition easy and intuitive whether the weapon is fired from the shoulder or at arms length like a handgun.

Special carrying devices are available for overt and discreet carry of the MP7A1. Due to its lightweight, small size and minimal width the MP7A1 is especially suitable for VIP protection details, pilots, drivers, guards, and support personnel who require hands-free carry of their defensive weapon while performing other tasks.

The most recent MP7 variant, the MP7A2, has a new style Picatinny Triple Rail handguard (3, 6, and 9 o’clock position) for the attachment of a forward vertical grip and other accessories. 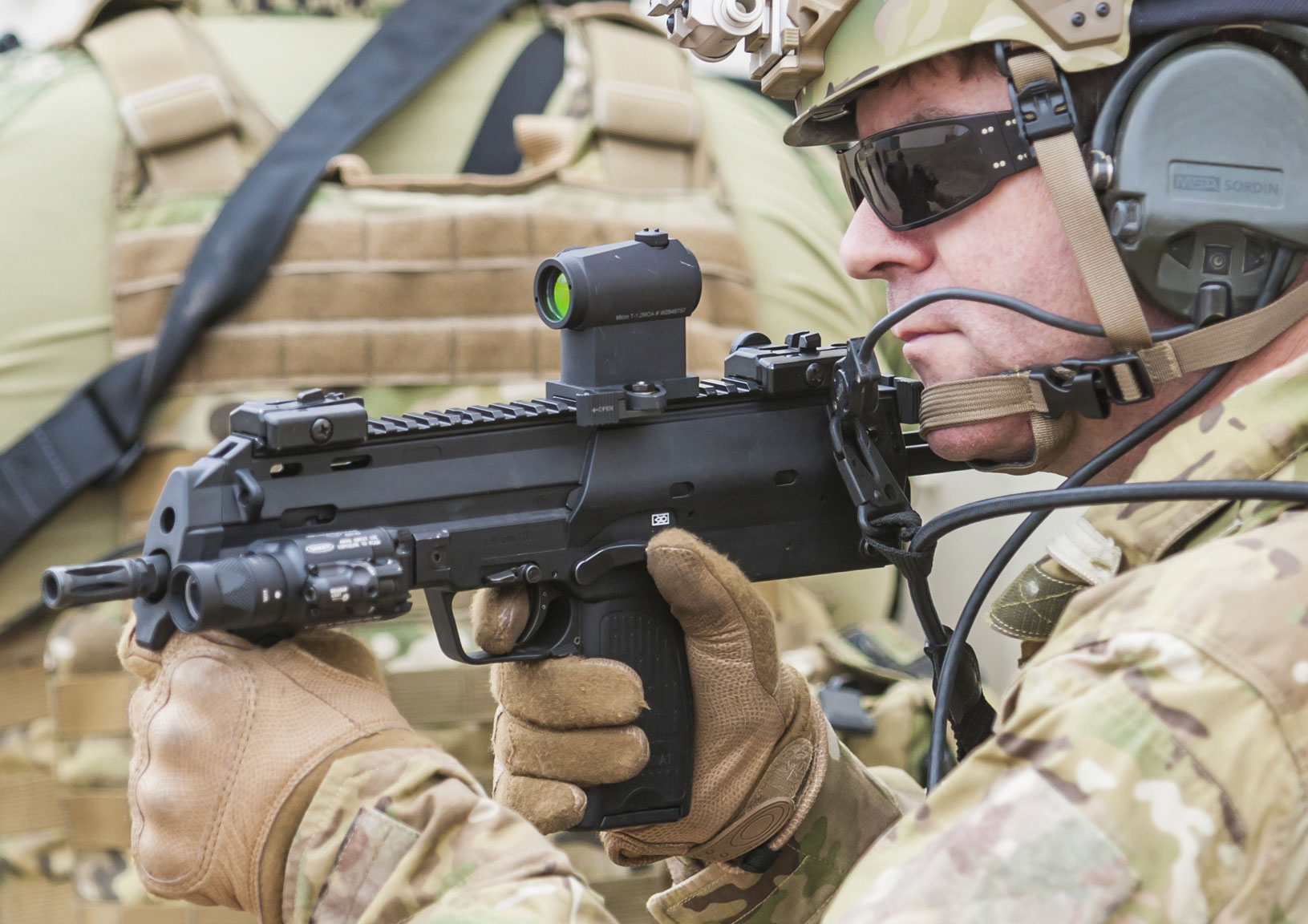 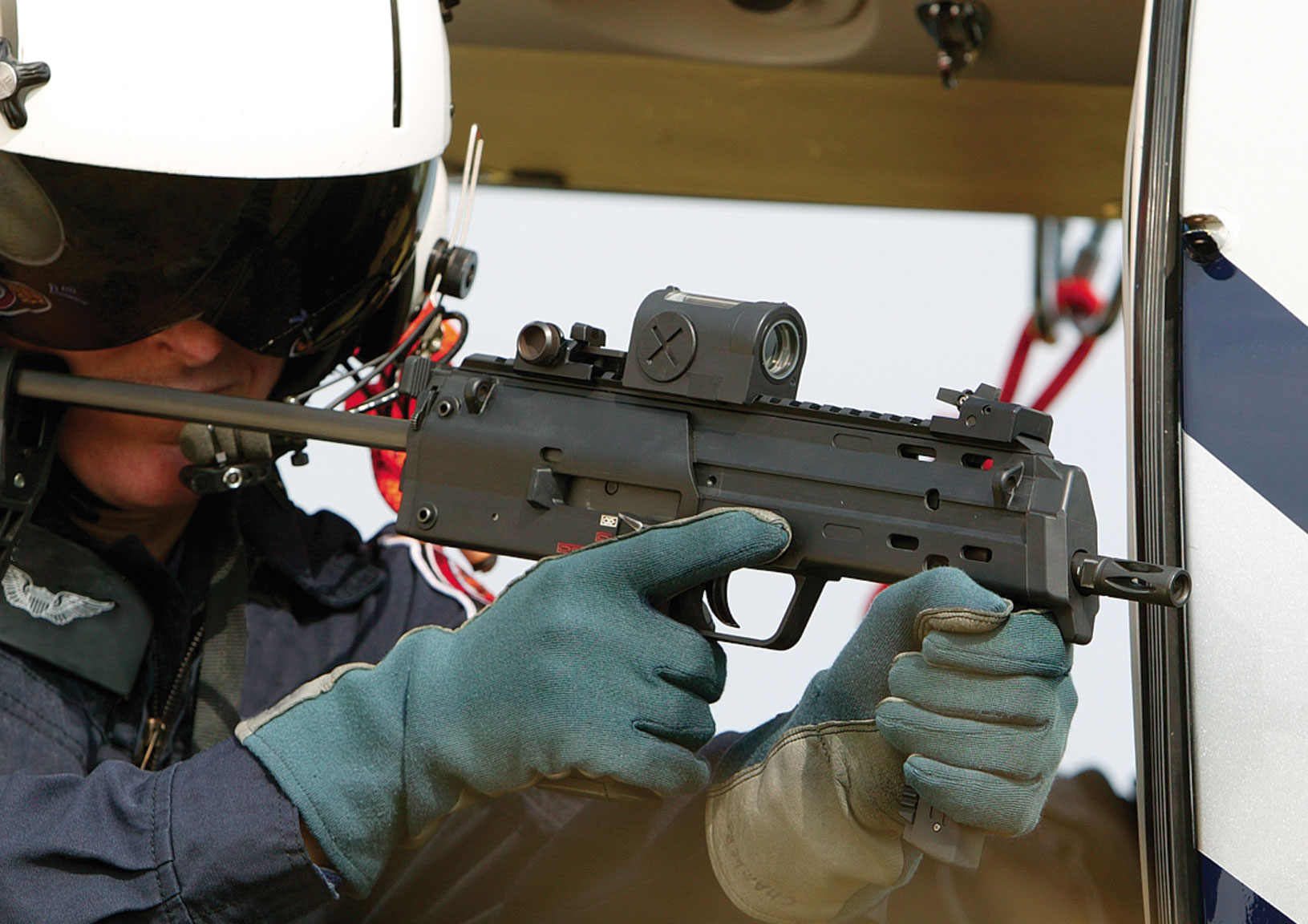 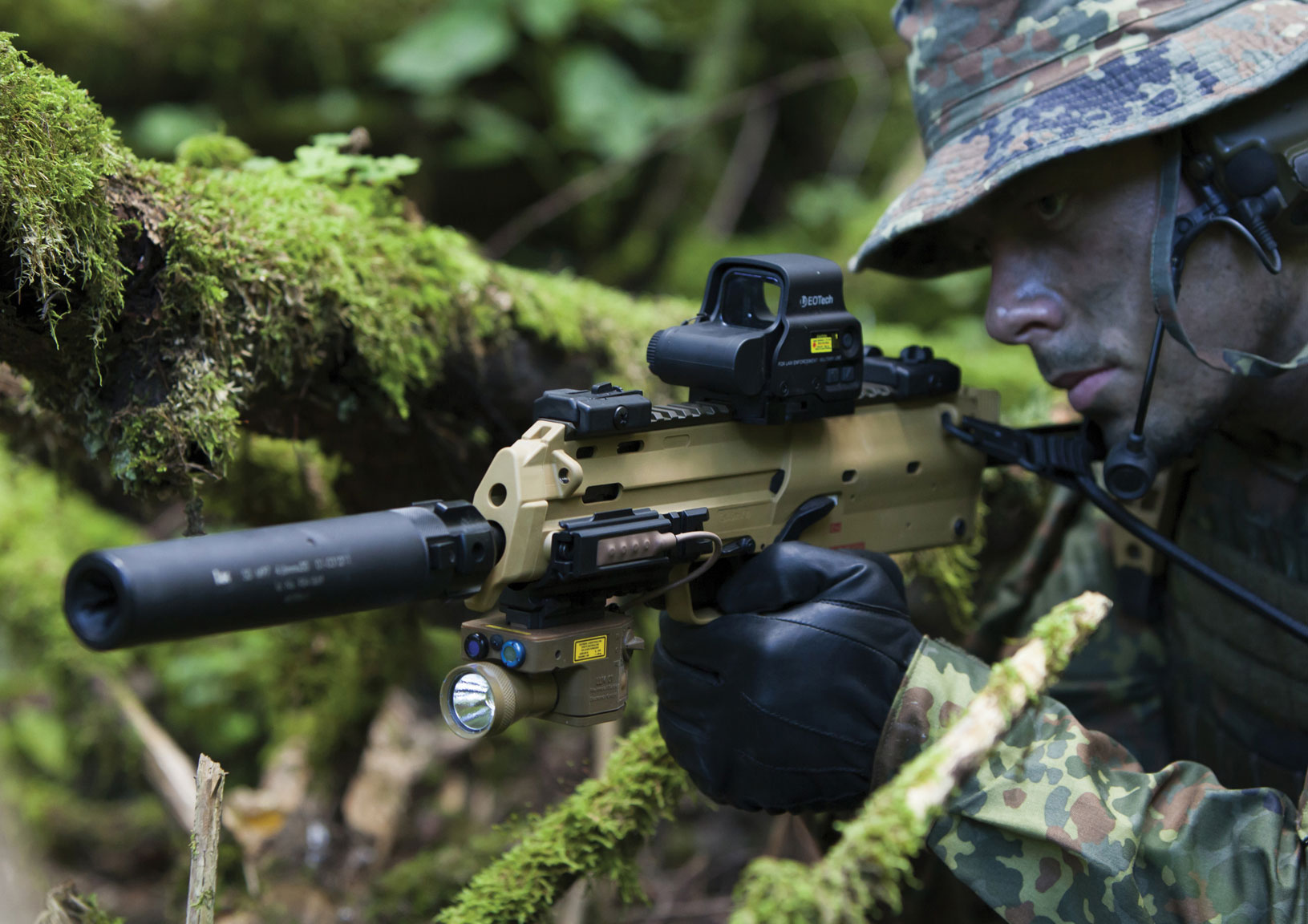 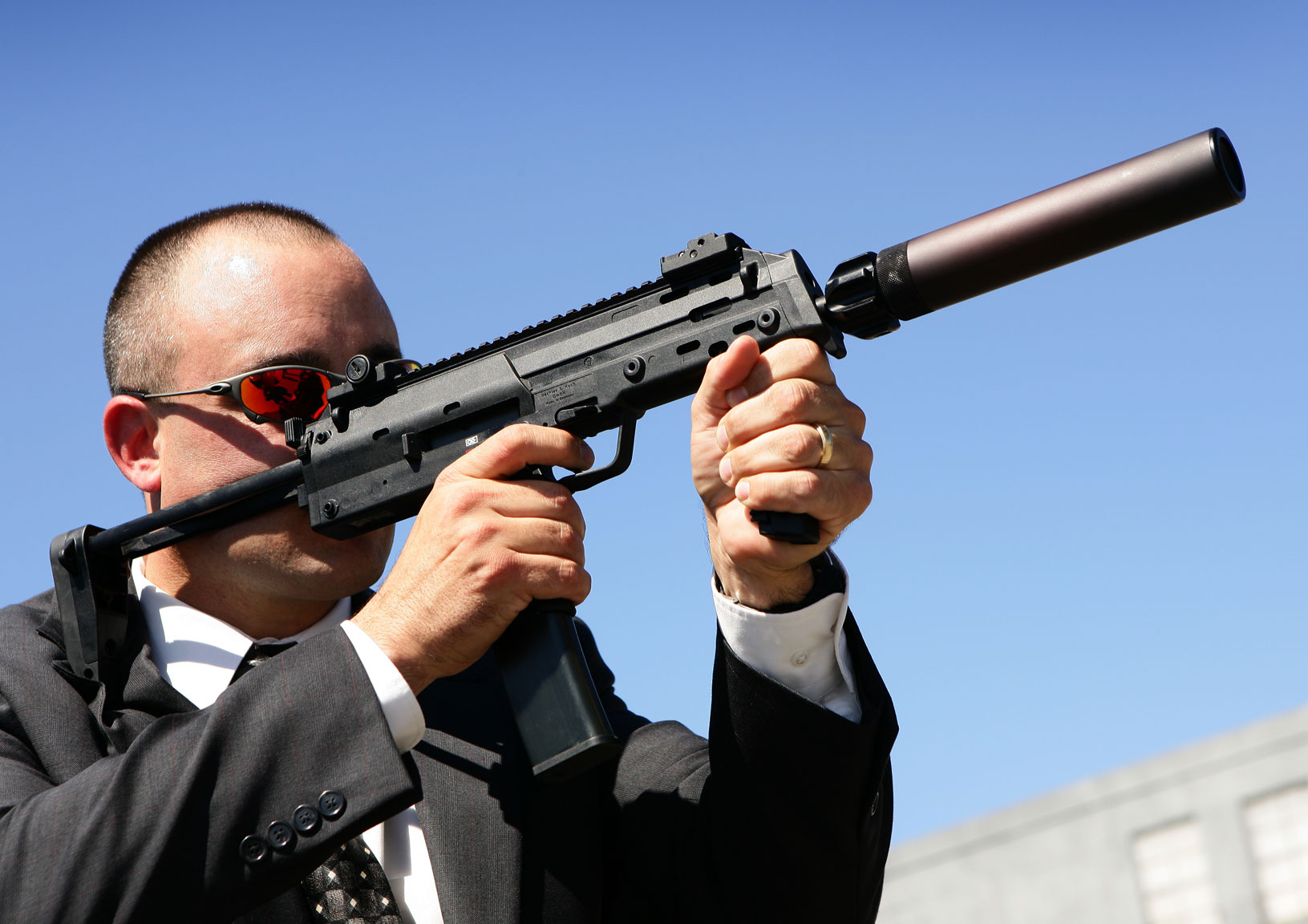