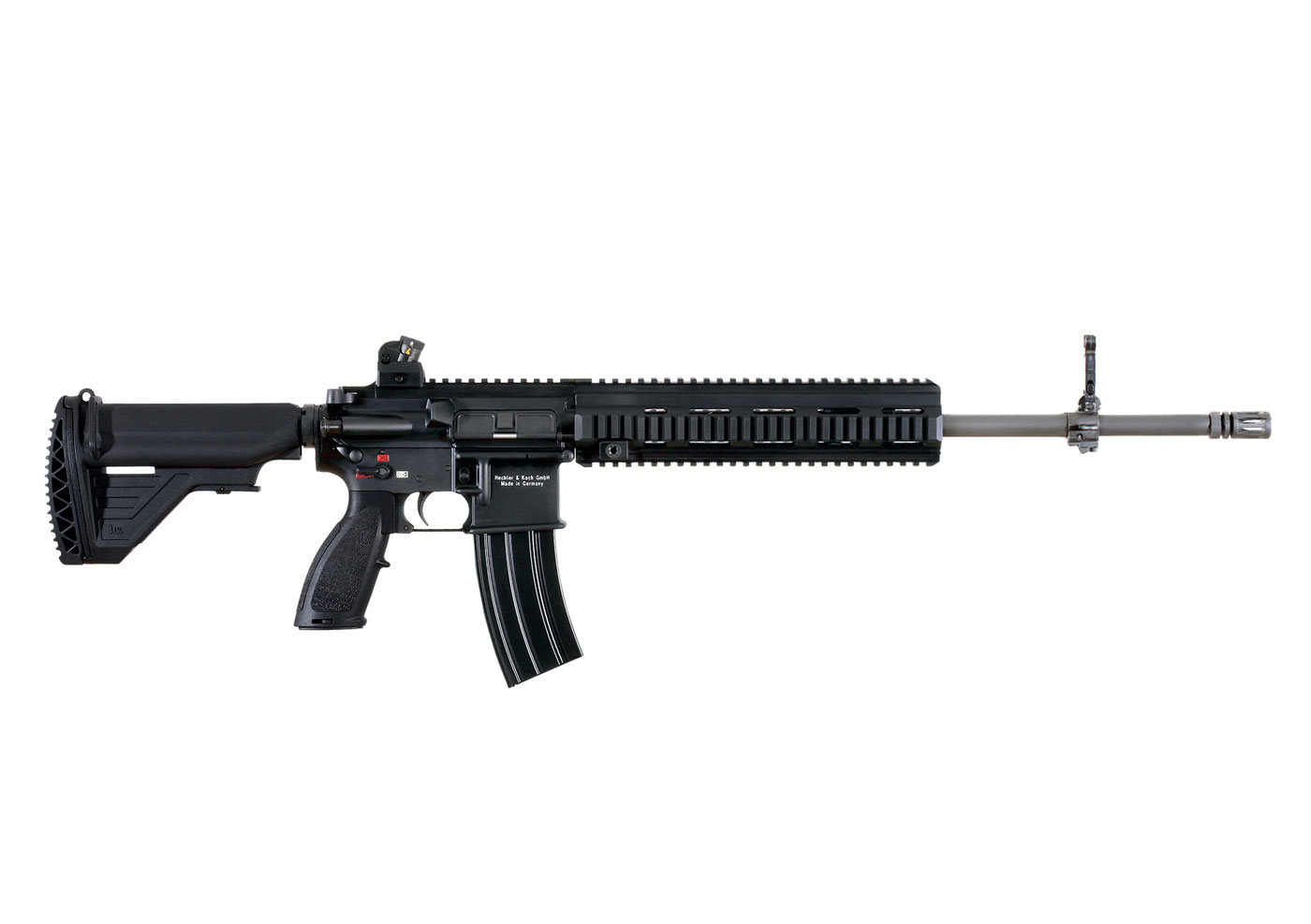 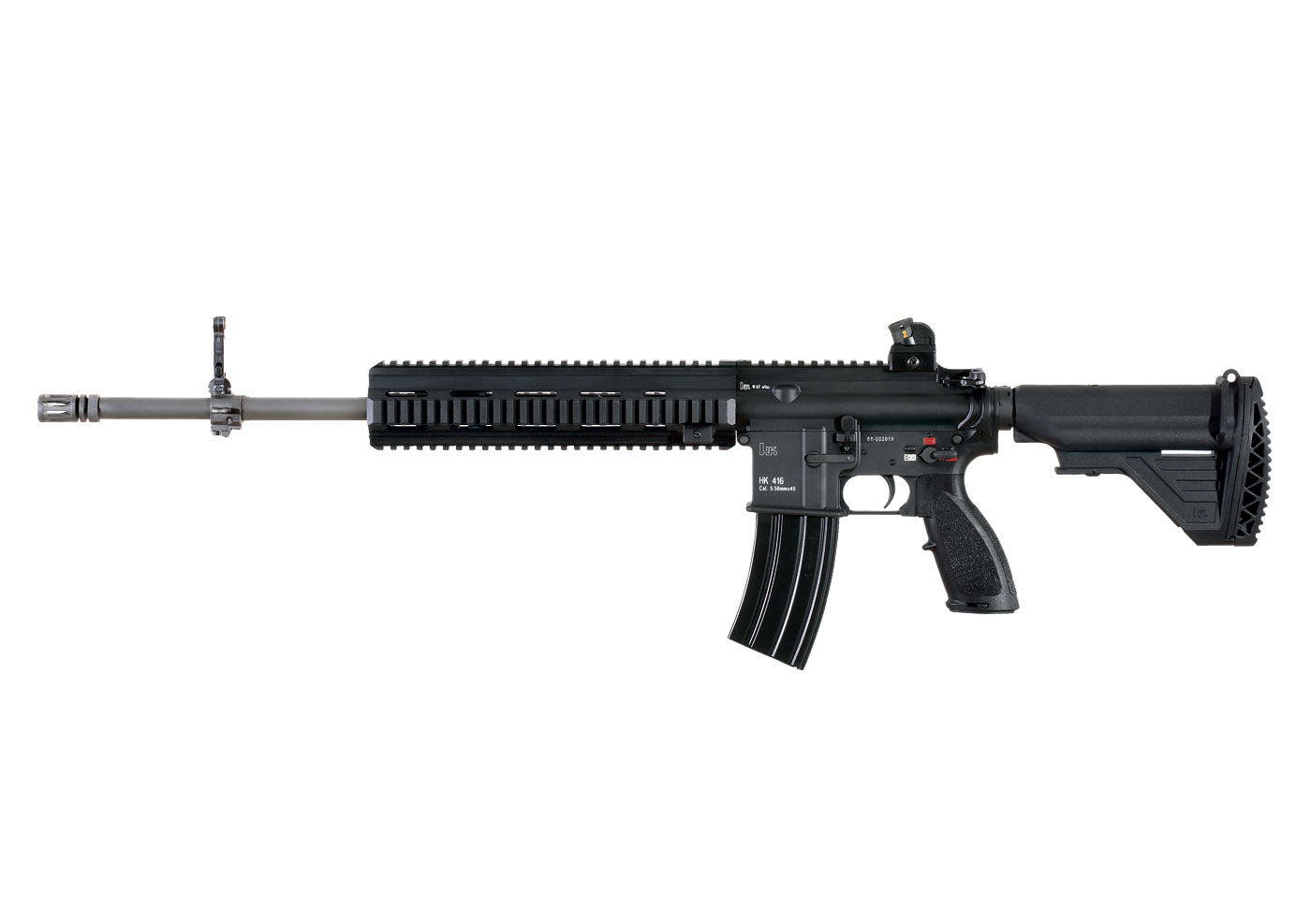 This HK416 variant with the longest barrel length the 20 inch model is suitable for use as a precision rifle.

Heckler & Koch developed the HK416 for U.S. special operations forces as a major product improvement of M4/M16-type carbines and rifles. Using the HK-proprietary gas piston system found on the G36, the HK416 does not introduce propellant gases and carbon fouling back into the weapon’s interior, making it the most reliable of any M4/M16 type weapon.

The HK416 has been combat-proven in Southwest Asia and has also gained worldwide attention of military, law enforcement, and security users.

In April 2007, this HK416 was selected as the new Norwegian Army rifle. And in 2011, this HK416 variant was selected by the U.S. Marine Corps an their new M27 Infantry Automatic Rifle (IAR) —  an innovative program to create a highly accurate, lightweight, and more reliable alternative to many of  Marine Corps’ currently fielded light machine guns.

The origins of the HK416 began with the realization of the deficiencies of the direct gas impingement (gas tube) operating system found on conventional M4/M16-style weapons.

Upgrades were made to the internal operating system and various component parts, improving reliability in best and worse case scenarios, with all types of ammunition, with all barrel lengths, and with and without sound suppressors attached.

Choice of  handguards include the HK free-floating 4-quadrant rail system (FFRS) and a modular rail system (MRS). Both are designed by HK and allow all current accessories, sights, lights, and aimers used on M4/M16-type weapons to be fitted to the HK416. These HK rail systems can be installed and removed without tools. Both are free-floating and do not touch the barrel or negatively affect the weapon’s accuracy.

The HK-proprietary gas system uses a piston driven operating rod to control the function of the bolt, preventing propellant gases and the associated carbon fouling from entering the weapon’s interior.

This increases the reliability of the weapon and extends the interval between stoppages. It also reduces operator cleaning time, heat transfer to the bolt and bolt carrier, and wear and tear on critical components.

The highest quality steel is used in this unique manufacturing process producing a barrel that provides superior accuracy with minimal degradation of accuracy and muzzle velocity. HK416 variants are available with 10.4, 14.5, 16.5, and 20 inch (264, 368, 419, 508 mm) barrels.

Some HK416 variants also have “OTB” (over-the-beach) capability and can be safely fired after being submerged in water and not completely drained.

In addition to the improvements in the baseline weapon, HK has produced corrosion resistant steel and polymer magazines as well as a proprietary buffer system to further enhance functional reliability.

An HK add-on 40 x 46 mm grenade launcher module can also be quickly attached to the rail system without tools.

For training, the proven and fielded HK Safety Blank Firing Attachment and Live Round Excluder kit can be used with all HK416 variants, eliminating the possibility of live rounds being loaded into and fired through a standard issue weapon outfitted for blank firing only.

As the leading AR-based piston driven weapon system, the HK416 is unsurpassed in durability, safety, and accuracy. It is also the most cost-effective AR type weapon when viewed through total life cycle analysis.